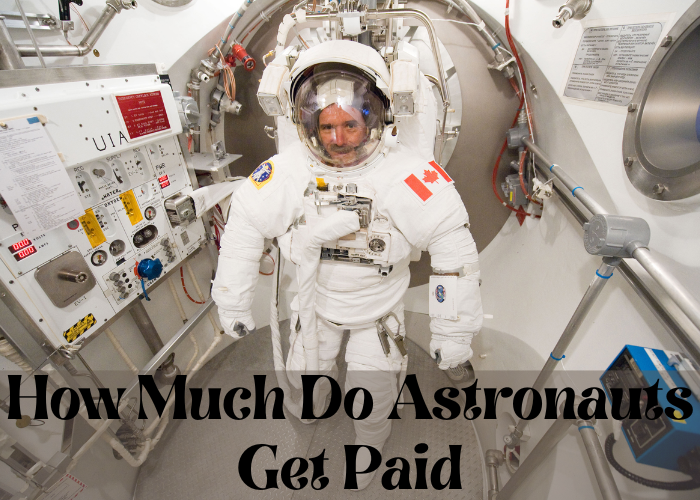 Aspiring astronauts may be wondering how much they could expect to earn in this highly specialized and exciting field. While the salary of an astronaut may vary depending on their experience and position within NASA, they generally earn a comfortable wage. Read on to learn more about what astronauts make and some of the benefits that come with the job.

How Much Money Do Astronauts Make

How much money do astronauts make? It depends on a number of factors, including their experience, the country they work for, and the specific mission they’re flying. American astronauts, for example, tend to make more than their counterparts from other countries. Mission specialists and pilot astronauts typically earn between $66,000 and $140,000 per year, while commander astronauts can make upwards of $180,000. Of course, these salaries are just a small fraction of what astronauts can earn through book deals, public appearances, and sponsorships. In short, while being an astronaut doesn’t necessarily make you rich, it can certainly be a lucrative career.

What Are the Benefits of Being an Astronaut

Being an astronaut is more than just a job; it’s an adventure. From the moment you strap yourself into the rocket and take off, you’re in for the ride of your life. But it’s not all fun and games; astronauts have to be highly trained professionals. They need to be able to think clearly and work quickly in stressful situations. They also need to be physically fit, because living in space takes a toll on the body. But the benefits of being an astronaut far outweigh the challenges. For one thing, you get to see the world in a whole new way. You’re not just looking at the Earth from space; you’re also getting a close-up view of the planets and stars. And because you’re weightless, you can do things that would be impossible on Earth, like floating around inside the spaceship or doing somersaults in zero gravity. Being an astronaut is an incredible experience, and it’s one that very few people will ever have. But for those who do choose to become astronauts, it’s a decision that they will never regret.

How to Become an Astronaut

Becoming an astronaut takes more than just dreaming of spaceflight. It requires careful planning and preparation, as well as a clear understanding of what astronauts do both in space and on Earth.

Astronauts must be in excellent physical condition, as spaceflight is physically demanding. They must also be able to pass a rigorous medical exam. In addition, astronauts must have a bachelor’s degree in engineering, science or mathematics, and must have three years of related experience or 1,000 hours of pilot-in-command time in a jet aircraft.

There are several ways to become an astronaut. The most direct path is to apply directly to NASA. Alternatively, aspiring astronauts can become test pilots or join the military. Once you have met the basic requirements, it is important to stay up to date on the latest developments in the world of spaceflight. By following these steps, you will be well on your way to becoming an astronaut.

The Journey to Becoming an Astronaut

It takes a special kind of person to become an astronaut. Not only do they need to be highly intelligent and physically fit, but they also need to be mentally and emotionally prepared for the challenges of space travel.

The journey to becoming an astronaut begins with years of study. Astronauts-in-training must learn about everything from the physics of space flight to the effects of microgravity on the human body. They also need to be well-versed in the use of space equipment and procedures. In addition to their academic knowledge, astronauts must also be able to pass rigorous physical and psychological tests.

Once they have completed their training, astronauts are ready to begin their journey into space. They start by testing new equipment and participating in short-term missions. As they gain experience, they are able to undertake more difficult and longer missions. Some astronauts even have the opportunity to go on spacewalks or participate in research projects.

The journey to becoming an astronaut is not an easy one, but it is a rewarding one. Those who are successful get to explore the universe and play a role in humanity’s quest to unlock the mysteries of space.

What Astronauts Do During Their Time in Space

During their time in space, astronauts have to contend with a lot of challenges. They need to stay healthy and fit, despite being in an environment where there is little to no gravity. They also need to keep their minds sharp, as they might be called upon to solve problems or make decisions at any moment. To help them stay on top of their game, astronauts typically stick to a rigorous schedule that includes plenty of time for exercise, work and leisure activities. Of course, they also have to contend with the occasional bout of homesickness, as well as the knowledge that they are cut off from the rest of the world for extended periods of time. But overall, astronauts say that living and working in space is an exhilarating experience that is well worth the challenges.

So, how much do astronauts get paid? The answer may surprise you. It turns out that the average astronaut salary is just over $100,000 per year. Of course, this number can vary depending on a variety of factors, including experience level and position within NASA. But it’s clear that becoming an astronaut is a pretty lucrative career choice! With all of the amazing things they get to do and see while in space, it’s no wonder astronauts are some of the best-paid government employees out there. Have you ever wondered what astronauts get paid? Turns out, it’s quite a bit!

How Big Is Disney World

How to call as an unknown number